The Bristow Uncrewed Aircraft System (UAS) team is set to expand its services in support of search and rescue (SAR) in the UK using the Schiebel CAMCOPTER® S-100.

In 2016, a small team of specialist operators began working in an embryonic industry with the goal of establishing Bristow as a professional UAS service provider. As with all new technology, there was a steep learning curve to overcome before Bristow began flight operations using small UAS (SUAS). These initial operations focused primarily on offshore asset integrity inspections. Bristow UAS quickly established itself as a key UAS player and influencer with the Civil Aviation Authority (CAA) and continued to build the company’s reputation for excellence in rotary operations.

Bristow UAS continued to operate a modestly sized fleet of SUAS for aerial surveying of helicopter landing sites, and in 2017 the focus shifted to positioning Bristow as a market leader in complex UAS operations.

With the strategic objective of developing a non-search and rescue capability, discussions have begun with Schiebel – the Austrian manufacturer of the UAS. The technically complex Camcopter® S-100 had never operated in UK airspace, and the team began to create a safety case to support a UK demonstration.

In 2018, Bristow was the first company authorized to operate the Camcopter® S-100 beyond visual line of sight (BVLOS) in UK airspace. A series of successful capability demonstrations took place at Llanbedr airfield in North Wales, attended by senior officials from the Maritime and Coastal Agency (MCA), CAA, law enforcement and Bristow’s management team. The five-day event showcased not only the capabilities of the aircraft and its sensors, but more importantly demonstrated the safe interoperability of UAS alongside manned SAR(H) assets at Caernarfon SAR Base.

On the heels of the success of the Capability Demonstration, Bristow created the UAS Prototype Service (UAS PS), with the intention of fully evaluating the potential utility of the platform and sensor to contribute and improve SAR operations.

In January 2019, Bristow received delivery of a CAMCOPTER® S-100 system, consisting of two aircraft, a ground control station and technical and logistical support. In keeping with its pioneering aeronautical heritage, the Bristow Camcopter® S-100 aircraft was the very first civilian registered UAS in the UK. The UAS operation has been fully integrated with the UK based SAR helicopter, proving the interoperability and synergies of collocation.

Over the next two and a half years, assessment sorties were launched from Caernarfon Airport, fully integrated into a complex airspace structure involving military, commercial, civilian and government users.

In the summer of 2020 and 2021, Bristow responded to urgent operational requests from the MCA to conduct routine situational awareness patrols using the Caernarfon-based Bristow UAS. Flights were carried out in the Llyn Peninsula, Menai Straights, West Anglesey, Llandudno and Snowdonia National Park.

During one such outing in August 2021, UAS located a yacht stranded on rocks. The UAS broadcast live footage of the incident to the HM Coastguard Area Control Center. This real-time situational awareness supported the incident commander’s decision-making; he chose to keep the Caernarfon SAR S-92 ready while the yacht was recovered, as there was no threat to life.

In November 2021, MCA requested Bristow to relocate UAASPS assets to Lydd Airport to provide situational awareness sorties over the English Channel in support of HM Coastguard operations . All UASPS assets based at Caernarfon have been relocated, the necessary CAA clearances have been obtained and access to airspace has been granted to meet demand. The capability was declared operationally ready on December 17, 2021.

As of March 1, 2022, the Bristow UAS capability has been integrated into UK SAR operations and is considered a “state asset”, much the same as the Lydd-based AW189 SAR aircraft.

“The development of the embryonic capability first envisioned in 2017, combined with the tenacity, professionalism and commitment of the Bristow UAS team of David Scott (Head of UAS Operations) and Ricky Huntley (Head of Training UAS), along with support from SAR teams at Caernarfon and Lydd has combined to deliver a world-class capability, at the forefront of BVLOS UAS operations, and hailed by HM Coastguard as a “game-changing capability said Neil Ebberson, SAR manager for Bristow in the UK.

He adds that the British Prime Minister also recognized the importance of the Bristow drone’s contribution to SAR operations when he was briefed by David “Scotty” Scott at Lydd SAR Base earlier this year.

The CAMCOPTER S-100 vertical take-off and landing (VTOL) drone does not require a prepared area or launch or recovery equipment. It works day and night, in adverse weather conditions, with a range of up to 200 km, both on land and at sea. The CAMCOPTER® S-100 has a cruising speed of 190 km/h with a service ceiling of 5,500 meters. 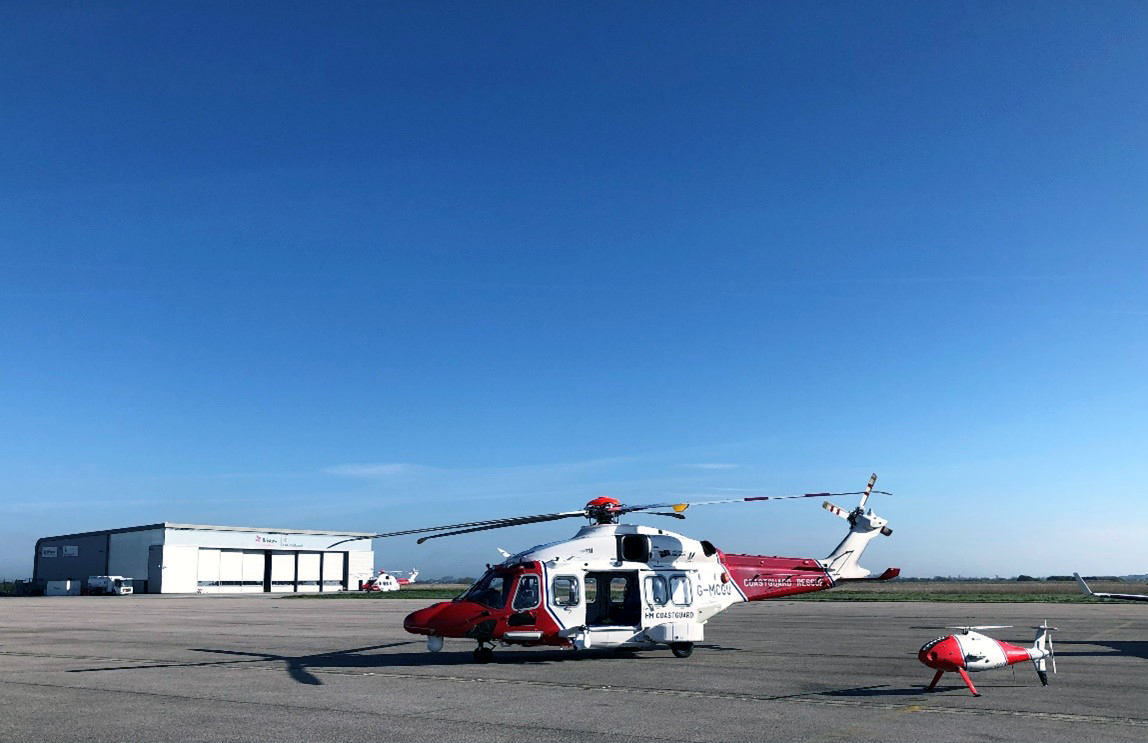 The CAMCOPTER S-100 is tasked, like the AW189 helicopters, by the HM Coastguard Area Control Center to respond to SAR events. 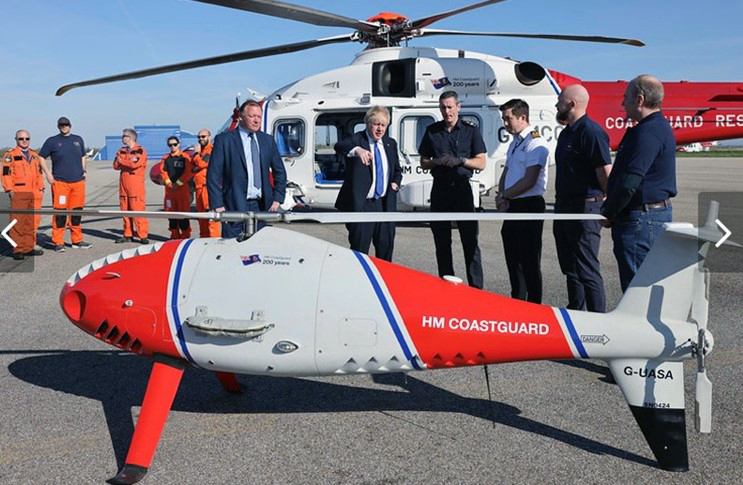 The British Prime Minister recognized the importance of the Bristow drone’s contribution to UK SAR operations when he was briefed by David “Scotty” Scott at Lydd SAR Base earlier this year. 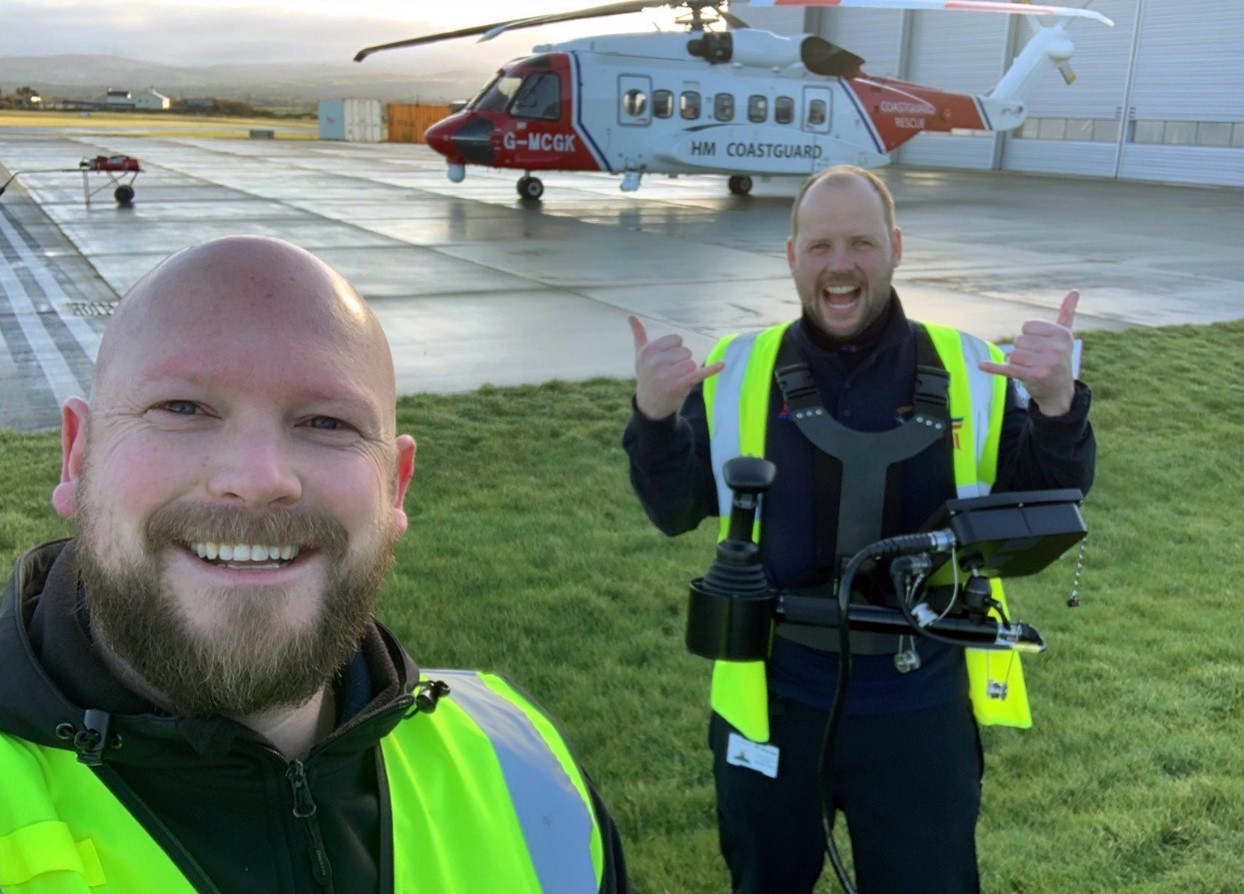 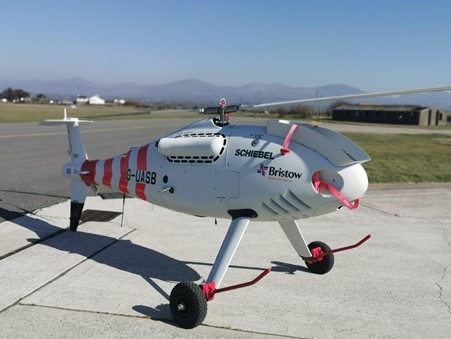 The vertical take-off and landing (VTOL) UAS does not require a prepared area or launch or recovery equipment. It works day and night, in adverse weather conditions, with a range of up to 200 km, both on land and at sea.